Wattle you do on National Wattle Day the 1st of September?

Wattle Day began in the late 1880’s with the suggestion of a formation of the Wattle Blossom League by William Sowden (an Adelaide journalist and Vice President of the Australian Natives Association in South Australia). The aim, recorded in 1890, was to “promote a national patriotic sentiment among the women of Australia”. The most visual way of acknowledging this was for women to wear sprigs of wattle at all official occasions. Unfortunately the group dissolved, however their presence had inspired the formation of a Wattle Club in Melbourne.

The concept of Wattle Day grew stronger and spread to NSW where the Director of the Botanic Gardens, J H Maiden called a public meeting with the aim of forming a Wattle Day League. As a result, the first observed Wattle Day was held on 1 September 1910 in Sydney, Melbourne and Adelaide.

Aside from celebrating being Australian, the Australian environment and history, Wattle Day generally relates to Spring and looking forward.

“However in 1917 the date was changed to 1 August due to an early spring that year, but in 1937 another date change back to 1 September being the start of the school holidays.
Botanists can’t quite agree but there appears to be around a 1000 species of Acacia which are colloquially called wattles by Australians. Another 700 species, mostly quite distinct from the Australian ones, are also found in Africa.

Wattleseed from around 120 species of Acacia have been used as foods by Australian Aborigines for at least 6,000 years. This matches the first cultivation of wheat on the fertile deltas at the mouths of the Nile in Egypt; the Euphrates in Mesopotamia (now Iraq); and the Indus in India. However, while the move to cultivation began a trend of reliance on an ever-decreasing number of food species, Australian Aborigines maintained a completely different relationship with the Land. They saw themselves as part of the ecosystem and did not attempt to conquer it. They were managers and care-takers of their country. As part of their charge of keeping the country healthy, they used a huge array of different foods to meet their nutritional needs and for numerous Aboriginal clans, wattle seeds were just a part of this food resource.

Traditionally, Australian Aboriginal women generally harvested the fully ripe, dry seeds from the wattle, collecting them as we still do today – by beating the pod-laden trees with sticks to dislodge the seeds. Some species were eaten at the green pod stage but dried seeds were by far more common.

Rather than the wattle seeds falling on cleared earth, modern harvesters spread shadecloth or tarpaulins under the trees and scoop up the pods and seeds (and the inevitable sticks, beetles and leaves) and stockpile it all for collection and cleaning. Various and ingenious mechanical harvesters have been used with varying degrees of success, from tractor power take-off driven vacuums to backpack units. Some even clean the seeds up in the field. This reduces the vast volumes of pods transported back to camp as a 1 cubic metre wool bale full of pod can hold as little as from 10 to 15 kg of seeds once cleaned (about a bucket full).

Back in ancient times, the seeds were collected in coolamons or bark dishes and hot live coals were added to heat parch the seeds. This makes them easier to mill to a flour otherwise the seeds tend to squash as though you were trying to mill fresh garden peas. Once adequately toasted and dried, the coals were removed and the coolamons used to yandy and bump the seeds clean from any debris. We use modern equivalents like huge fans and vibrating table sieves to clean the seeds and then roast them in modified coffee roasters. Anyway, the Aboriginal processed seeds were milled to a coarse meal which was then baked into seed cakes.

The modern use of wattle seeds came about when Vic Cherikoff was preparing the seeds from 4 or 5 wattle species he’d had sent in from Central Australian Aboriginal communities with whom he was working on the nutritional analysis program at the University of Sydney. The Aboriginal women had sent in raw seeds and while these were useful to analyse, he also needed the seeds as prepared ready to eat.

And so he found himself roasting the seeds in a saucepan on his kitchen stove. He heated the seeds while tossing them around and heard a few popping noises as the seeds super-heated inside their seed coat and then suddenly released the energy as the seed coat popped. He then transferred the roasted seeds to an electric coffee bean grinder and gave them a spin before taking off the top to look at how they’d ground up. What an aroma! Up came this incredible, coffee, chocolate, hazelnut, toasty, roasted flavour which was just superb. Vic then ground the seeds up more and tried the dark brown, coffee-like grounds in his stove-top cappuccino machine. The rich extract poured through and was then tried black, with milk and then with a topping of frothed milk and the world’s first Wattleccino™ was born. It was delicious with the milk (or cream) bringing out a sweetness in the Wattleseed. It even worked with a small amount of coffee added and this extract, which we now manufacture using state of the art, counter-current extraction technology, has been proven as a fantastic flavour for cream, ice cream, nut butters, sauces and in beverages.

Like the roasted and ground Wattleseeds, the extract can be used in a multitude of ways. A clue when using the grounds is to pre-extract the flavour and soften the grounds by boiling the small quanitity you need for the recipe in a little water. The extract is just the ready-made product with the grounds removed. The extract also has an emulsifying action and is an effective stabiliser for whipped cream, nut butters and some oil and water mixtures (sauces, particularly emulsion sauces, dressings etc).

Add Cherikoff Wattleseed to whipped cream, icecream, pancake, bread or muffin mixes, pasta, chocolate and chocolate fillings, biscuits and beverages (Wattleccino™ is simple to make with Wattleseed extract – just add hot water and frothed milk). Also use as a flavouring for beer, cream or red wine sauces, in marinades and dessert sauces. Approximate usage rate is from 2-3%, depending on the flavour of other ingredients and whether the Watttleseed is enhancing or competing with these other tastes.

Wattleseed as medicine and nutrition
The fats in wattle seeds are typically 5 to 10% of the raw seed weight but there is an interesting point to note here. Many Acacia seeds have an appendage known as an aril which is a structure which holds the seed in the pod. The arils can vary in colour from a light tan to bright yellow, orange or red. No studies have been conducted on the pigments which are probably carotenoid compounds which are related to and often precursors of vitamin A. What we do know is that the arils are very high in polyunsaturated oils and many taste absolutely delicious. In fact, some species were used by Aborigines to flavour their drinking water: The whole seeds, with arils attached, were immersed in water and worked through the fingers to almost homogenise the fats into the water. It certainly flavoured the water and I can best describe the taste as close to the toasty notes of just baked bread but with a range of interesting aromatic flavours, again, depending upon the species.

So what are you going to do on Wattle Day? Try one of these recipes and please feel free to send in your own recipes using Wattleseed and go in the draw to win a Furi Chef’s knife

You can purchase Wattleseed or Wattleseed Extract from our online store. 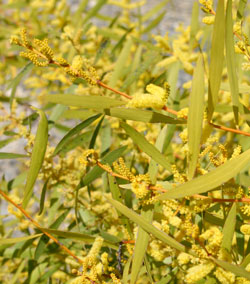 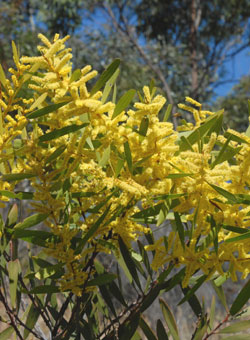