Paperbark Smoke Oil is a uniquely Australian and deliciously flavoured infused oil, which is used in the same way as truffle oil but is far more versatile and widely appealing. It is made from Paperbark, the outer papery bark from an Australian swamp tree and which was traditionally used by Aborigines as a food wrap. In the modern kitchen, Paperbark is a useful, natural, biodegradable material which can replace greaseproof paper, baking paper, oven bags, plastic wrap and aluminium foil while imparting a delicate smokey flavour now infused into Paperbark Smoke Oil.

For years, Cherikoff Rare Spices had been sending Paperbark to their distributor in the USA with no problem or concern and had built up quite a market there. “Unfortunately, this all stopped when the USDA decided that our product be banned as an environmental threat. So in an effort to address both challenges of environmental restrictions and imparting flavour with ease, I developed Paperbark Smoke Oil using canola oil, infused with the natural smoke flavour of Paperbark” says Vic Cherikoff.

Paperbark Smoke Oil is cholesterol free and it is used so sparingly that the added oil hardly matters as dietary fat. It is ideal for fish, shellfish, meat and vegetables, condiments, dressings; effectively it can be used in any dish that a subtle hint of smoke would enhance. Try a drizzle over roasted corn on the cob, or a dash in a seeded, Dijon style mustard. This turns an ordinary condiment into something really special. Add a splash of Paperbark Smoke Oil to your favourite sauce (just before serving) or soup.

We invite you to visit our online store for Paperbark Smoke Oil and other authentic Australian products and we welcome anyone to submit recipes using our ingredients. 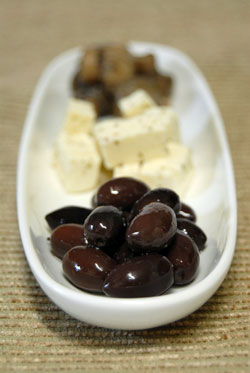 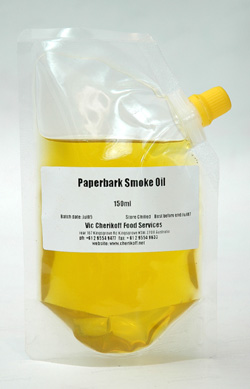